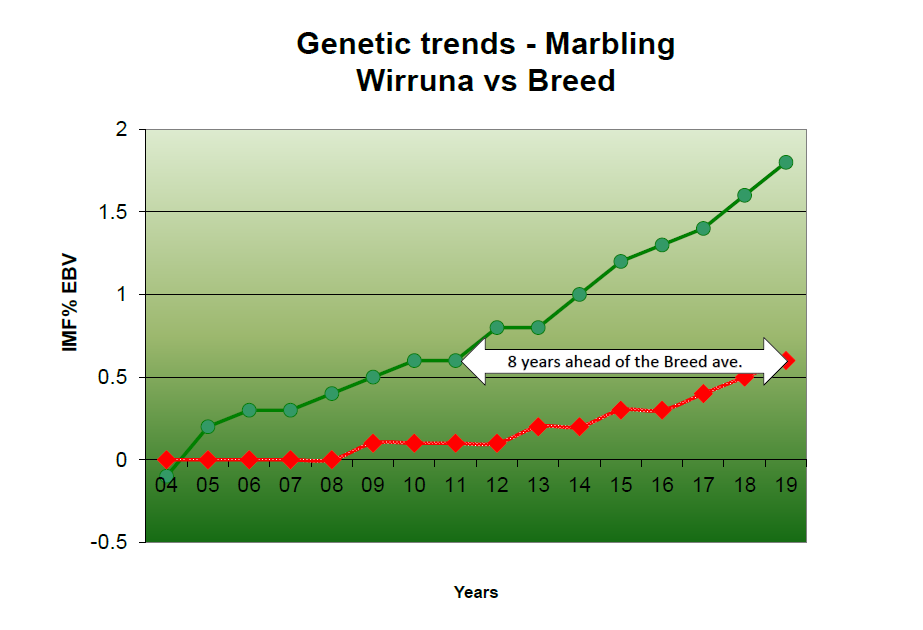 Wirruna Poll Herefords are well known for their level of performance recording of their beef genetics and their drive of improving various commercial traits that are required by beef producers and the beef market. One trait of importance is marbling, which is the small flecks if fat scattered throughout the muscle. This intramuscular fat is important as it contributes to beef juiciness, tenderness and flavour. It is distinctly different in eating & health benefits to consumers as compared to subcutaneous fat, or the fat outside the muscle.

Live animal measurements for marbling was added to the carcase ultrasound scanning conducted at Wirruna in 1998 as part of validating the Intramuscular Fat Estimated Breeding Value (IMF% EBV) for BREEDPLAN©. Since that time, the accuracy of the IMF% EBV has grown and Wirruna selection emphasis on marbling has resulted in the herd having the highest level of genetic marbling in the Australian and New Zealand Hereford populations. This has been achieved in a balanced trait selection approach, not at the detriment to other important cattle performance traits.

This graph illustrates that Wirruna Poll Herefords are 8 years ahead of the Hereford breed in their genetics for marbling.

When we rank the animals with the highest IMF% EBVs, Wirruna prefix animals represent 75% of the top 100 animals in the Hereford breed. In Wirruna’s Autumn Bull & Female sale to be held on 26th February 2020, 61 bulls will be offered for sale, averaging within the top 5% of the breed for marbling. 5 of those bulls rank in the top 100 animals for IMF% EBV.
Wirruna are open on 29th January 2020 as part of the Beef Week Field Days. This represent an ideal opportunity to inspect the Wirruna herd, the upcoming sale bulls & females and discuss your requirements to capture some of the breed leading traits that Wirruna genetics offer.