This year marks a major milestone for the Wirruna Poll Hereford Stud herd at Holbrook, owned and managed by the Locke family for 3 generations.  The current custodians of the herd, Ian & Diney Locke of “Spring Valley” Holbrook are keen to celebrate the fact that the Wirruna herd have achieved many successful highpoints in its history and has successfully passed through previous generations to grow stronger and develop over time into one of the most established and well recorded Hereford herds in the country.  An important aspect to Wirruna’s longevity has been the ability of the management to remain at the forefront of modern breeding technologies and offer genetics and services that are most relevant to their commercial beef breeding client.  According to Ian Locke, the fact that Wirruna Poll Hereford Stud has a long history does not infer ‘traditional’, but instead ‘success by innovation’. 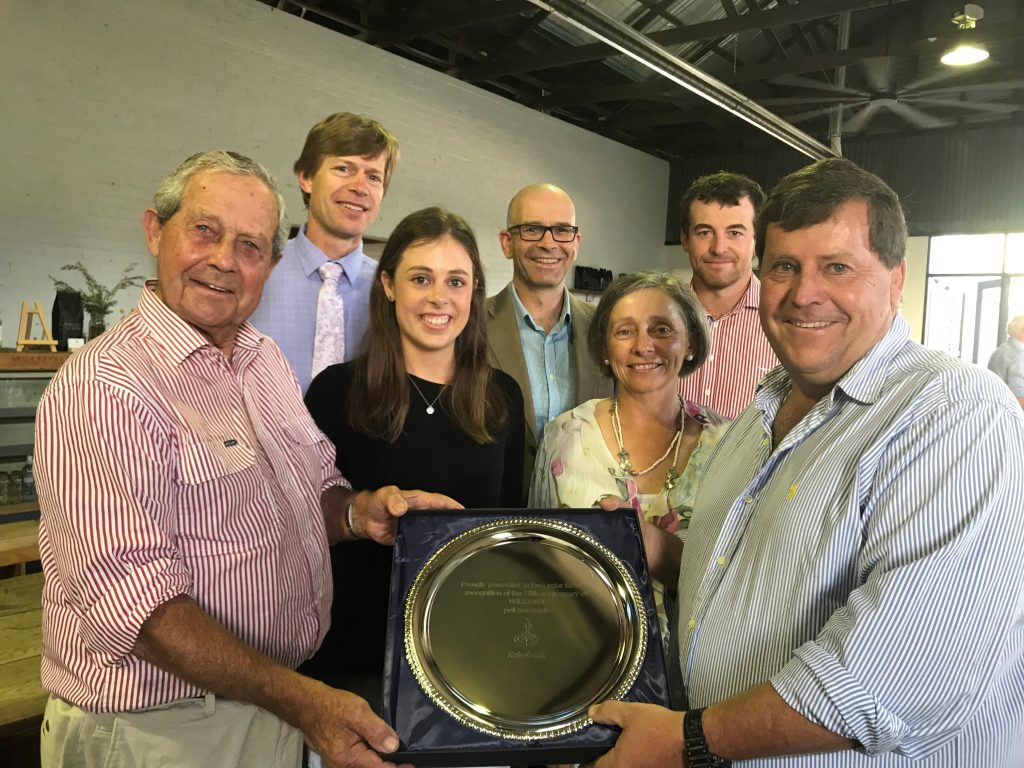 The Wirruna Poll Hereford herd was established by Ian’s grandparents Aubrey & Ruby Locke in 1949.  The first calf was Wirruna Romeo (Aust Herdbook of Poll Hereford cattle No. 2155) was born on 8th November 1949.  The numerical number indicates that Wirruna Romeo was the 2,155st male calf to be registered with the breed society.

Originally, the stud was set along traditional lines with success being recognised by a large number of show ribbons and many Hoof & Hook competition awards that proved Wirruna was a leading herd in the show ring through the 1950’s and 60’s.

When Richard Locke succeeded his father as principal of the stud in the early 1970’s, he was frustrated by the stud industry’s concentration on showing cattle rather than being aligned to the needs of commercial cattleman.   The stud therefore made a fundamental change in direction in 1972 to genuine performance testing raised on grass.

In turning his back on the show-ring and its culture, the sacrifice made was the associated publicity and the need to re-educate a client base away from the over-fed, show orientated bulls to buying grass-fed bulls selected on performance and high fertility under commercial stress conditions.

1994 saw further succession of Wirruna Poll Herefords with Ian Locke, representing the third generation of the Locke family involved in the management of the Wirruna Herd.

In our 70th year, today’s cow herd at Wirruna involves calving 600 registered females and selling close to 200 bulls per year.  The fundamental principles remain, running and selecting beef genetics that are able to survive & thrive under commercial stress conditions.  Fully performance recorded with Group BREEDPLAN©, and now boosted with the adoption of genomics, remains at the frontier of seedstock production and innovation for the commercial beef producer.

Wirruna rates as one of the largest registered Hereford herds in the country and is recognised as running a very disciplined production system with a high level of commercial focus.  In terms of performance recording, very few herds can boast more recorded animals.  This long history of selection, using high quality performance data, has seen the Wirruna herd make genetic gains of double that of the breed for the last 15 years where the average 2017 born Wirruna calf is now rated in the top 5% of the breed for all $Index values.  Wirruna dominates the breed for fertility, calving ease and carcase traits.  This carcase focus has seen them become the highest marbling herd on the Hereford database.

Wirruna will hold their usual two on-property production sales this year, and the Autumn sale on March 13th marks the ideal time to celebrate 70 years of Wirruna Poll Herefords.