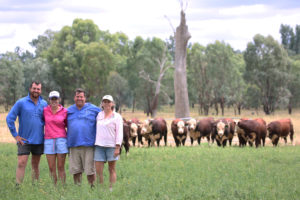 The utilization of Genomic technologies to determine the actual genes carried by livestock is now well accepted and leading seedstock breeders are using DNA for parent verification, to identify the existence of/or free from genetic diseases, and to better explain the genetic makeup of an animal.  There are simple traits like coat colour or the Poll/Horn gene, but also more complex traits, that can be evaluated to give us better estimations of an animal’s genetic merit via BREEDPLAN© Estimated Breeding Values (EBVs).  There are currently genomic predictions for traits like calving ease, milk, average daily gain, muscle, marbling, docility, carcase weight and residual feed intake.  As the technology develops, more and more traits are being evaluated and correlations of genes to traits like resilience, health and environmental impact traits are being researched. An early adopter of genomic technologies has been Wirruna Poll Herefords at Holbrook.  Ian Locke of Wirruna said that he first took DNA samples of his Poll Hereford herd from key Sires and Donor cows in around 2007.  “Since 2011, we have been routinely providing bull sale catalogues with DNA information such as the presence of the Poll gene”, where Homozygous Poll bulls (carry two copies of the Poll allele) genetically dehorn all progeny.  “This has been very useful for clients seeking move from horned cow-base to Poll cows over time, and reduce the stress associated with dehorning progeny.” In 2016 Wirruna moved to DNA testing all progeny at birth and all older breeding cows in the herd born prior to 2016.  “This has enabled us to move to a 100% genomically tested herd”, Ian said, “this allowed us to offer clients bulls that are fully parent verified to both the Sire & the Dam, free from known genetic conditions and importantly, have more accurate EBV’s to enable clients (& me) to make more precise selection decisions”.  When asked, what was the key benefit that commercial bull buyers will see by having genomically enhanced EBVs, Ian said that there are two major things happening; “Genomics is providing Breeders with a better description of an animal’s genetic potential at a younger age.  This lift in EBV accuracy significantly improves the opportunity for genetic gain through selection”  Ian said. Wirruna have now amassed over 4,500 genomically tested animals, these are also fully recorded on BREEDPLAN© and represent close to 20% of all Herefords genomically tested on the Herefords Australia reference population.  The Wirruna Autumn Bull & Female Sale is to be held on Wednesday 10th March, on property at “Spring Valley” Holbrook & interfaced with AuctionsPlus.  The Locke family will also open their gates as part of the Beef Week Field Days on Wednesday, 3rd February 2021. This represent an ideal opportunity to inspect the Wirruna herd, the upcoming sale bulls & females and discuss your requirements to capture some of the breed leading traits that Wirruna genetics offer.
Wirruna | OGA Creative Agency