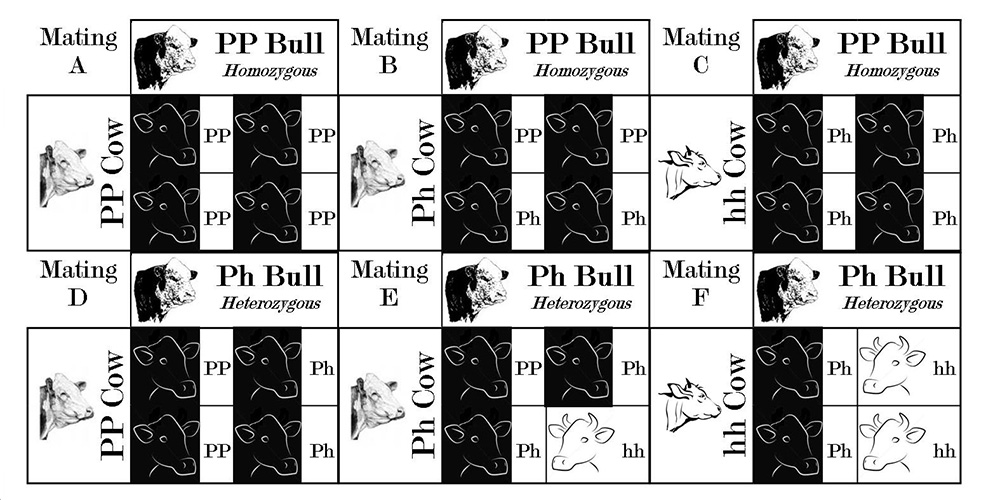 “Finding a horned calf resulting from the joining of polled parents can sometimes be an unexpected and often unwanted surprise” Ian Locke of Wirruna Poll Herefords exclaimed.  “However, it is easily explained if we understand how the genetics of horns and polledness works in beef cattle.”

Every animal has a pair of genes for each trait, each gene inherited from each parent.  In the case of horned cattle, a calf carries one copy of the horn gene (h) from its sire and 1 copy of the horn gene from its dam.  This is denoted by ‘hh’ in the diagram.  Polled is dominant to horns in Bos Taurus cattle, so animals only need one copy of the polled gene allele (P) to be polled (absence of horns).  The only time when the recessive horn gene can express itself is when the dominant P gene is not present.

A PP animal is known as homozygous polled because it possesses two identical copies of the P allele.  (“homo” means “the same”).  It will only have polled offspring regardless of whether the other parent is polled or horned. This scenario is shown in the matings A, B, C & D.  This means that Homozygous (PP) bulls are 100% genetic dehorners, even if used over horned cows.

In contrast, ‘Ph’ animals are referred to a Heterozygous polled. Although they are polled, they carry one copy of the horn gene, which they will pass on 50% of the time to their offspring.  Therefore, the resultant calves may be horned if they are matched up with a horn gene from the other parent.  Mating ‘E’ reflects the 25% chance of progeny being horned out of a mating of two Heterozygous ‘Ph’ polled parents.  In mating ‘F’, there is a 50% chance of horned progeny where a ‘Ph’ heterozygous bull is used over horned ‘hh’ cows.

In the last 3 years, the Wirruna herd at Holbrook has been utilising new DNA ‘Gene Marker’ technology which has come out of the Beef CRC.  A genetic test has been developed, which for Herefords, accurately identifies ‘marker’ genes that are associated with either polled or horned animals.  Importantly, homozygous polled animals can be identified by testing a DNA sample of tail hair extracted from the animal.  This information is of great interest to stud and commercial breeders who are keen to genetically dehorn their cattle rather than the stress and costs associated with physically removing the horns, a requirement of many feedlot and market systems.

In the upcoming Wirruna bull sale on Wednesday 28th August 2013, half of the 62 sale bulls offered are DNA tested as homozygous polled.  “Their popularity with clients is demonstrated at last year’s Spring sale result, where the PP bulls averaged $375 more than the overall sale average” Ian said.