Carcass and fertility in demand at 2013 Wirruna spring sale 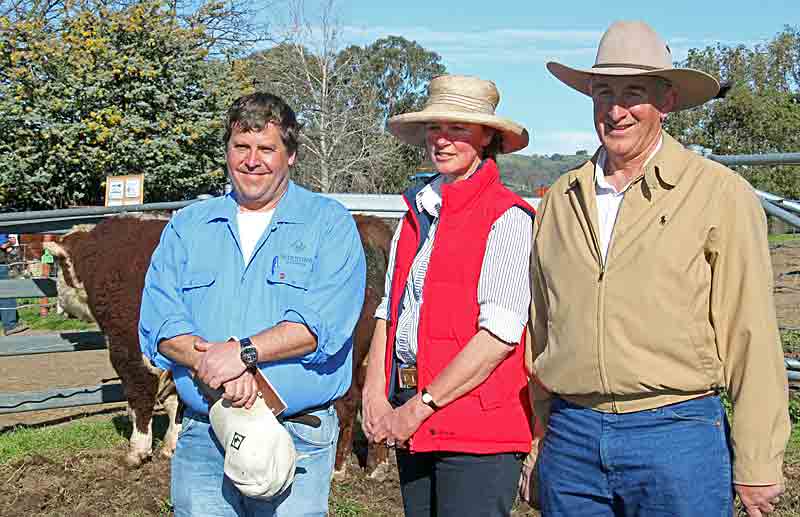 Hosted on-property at Holbrook by the Locke family, the August 28 Helmsman sale drew more than 50 registered seedstock and commercial bidders.

In the female catalogue, nine PTIC autumn calving heifers sold from the 10 offered to top at $2800 and average $1533.

The spring 2011-drop bull, Wirruna Gason G130, was an 832kg son of Wirruna Daffy D1, had been used to join stud heifers as a yearling and ranked in the top one per cent on Breedplan for grass and grainfed indices. 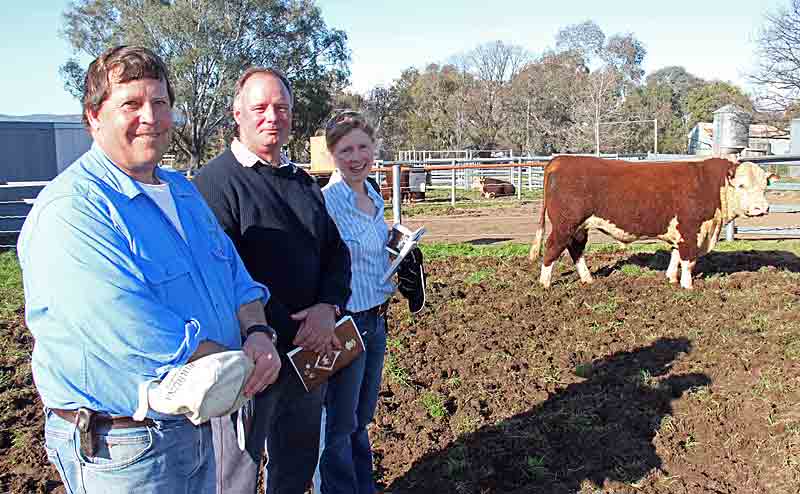 Ian Locke with John Waterhouse and Cath O’Malley, of Molesworth,Victoria.

“I was looking for bulls with IMF (intramuscular fat), high EU index, calving ease, 400 day growth and milk,’’ she said.

Repeat client Ian Blight, “Gum Creek’’, Wilbriggie, was a volume buyer on the day, taking home four bulls to a top of $6500. 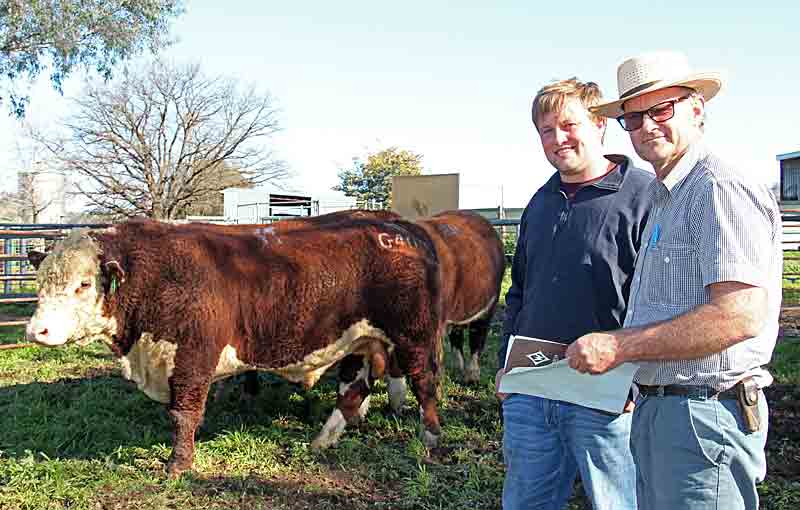 “I have been buying Wirruna bulls for 15 years as the cattle do well on our native pastures and the progeny attract a premium,’’ Mr Blight said.

The spring 2011-drop homozygous polled bull ranked in the top one per cent on Breedplan for eye muscle area, marbling and all the $Index values.

Mr Ian Horlsey said the bull had the carcass figures and visual appeal to suit his breeding program.

He runs 250 Poll Hereford females turning off calves into the regional weaner markets.

They were impressed by the heifer’s type, bloodlines, conformation and joining sires.

“This sale had a good clearance considering the year and the bulls looked excellent,’’ John Coleiro said.

Wirruna principal Ian Locke was happy with the clearance, considering more bulls were catalogued this year.

Mr Locke said market and seasonal conditions had not been kind to commercial beef producers but they had shown faith in the breed at the sale.

Riverina buyers included The Bull family, Boree Creek, paying to a top of $6750 for two bulls, Gunnong Pastoral Company, Coolac, buying four bulls to $6250, the Hill family, Springvale, Cootamundra, one bull for $3250, and the Booth family, Hay, two bulls to a top of $5250.